One of our very own Marketing Associates at GameChanger is launching a new start-up company to introduce a new superfood to health-minded consumers – and also possibly reduce world poverty and malnutrition. 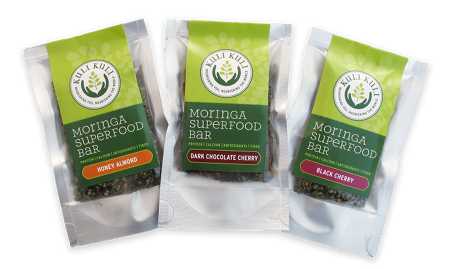 Kuli Kuli, Inc. [2], debuted yesterday, and is using crowd-funding site Indiegogo.com [3] to raise initial launch money.  In its first day, the company already raised almost half of its targeted funding.

Kuli Kuli is selling a new line of nutrition bars based on moringa, a plant native to West Africa that has several nutritional benefits, and is rich in protein. 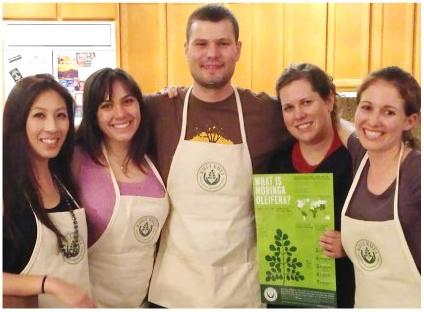 The venture was inspired by an assignment Curtis had in the Peace Corp three years ago in Niger.  She wanted to do something to help villagers there sustain themselves nutritionally and economically when she learned about moringa.  Moringa is high in nutrients. It is rich in protein, potassium, calcium, iron and other vitamins and minerals.

When Curtis returned from Niger, she and former high school friends Popelka and Moncharmont began experimenting with moringa in the kitchen, and eventually came up with a line of nutritional bars that incorporate fruit, nuts and other raw ingredients.

All of the moringa used in Kuli Kuli products is sourced from women’s cooperatives in West Africa. These women are paid a fair wage, but are also encouraged to keep a percentage of their harvest for their own consumption.  The company’s mission is not only to bring a new superfood to the world – but to help communities in West Africa develop a sustainable source of income and nutrition.

While the Kuli Kuli team was honing its product, GameChanger provided resources to help them package and sell initial product.  The team began by selling bars at San Francisco-area farmers’ markets.  The products have sold out at almost every event – and through the process the team improved their package, products and messaging.

“We are an innovation company and want to encourage our team members to be innovative,” said Larry Popelka, GameChanger CEO.  This is the second start-up company from a GameChanger associate that GameChanger has had a hand in supporting.  The first Venture, GenJuice, a social network for entrepreneurs, was accepted to participate in a New York City Media Combinator before being launched in 2011.

Kuli Kuli is now moving to the next level and lining up funding and partners for larger scale production.  Initial funders on Indiegogo will be entitled to a supply of bars.  The company will also be launching online sales and is looking to expand into Nutrition and Health Food stores.

For more information, visit kulikulibar.com [5] or their Indiegogo page here [6].